Techniques Recommended by the Experts

Plumbers Recommended Technique Of How To Unclog A Sink

The Kitchen Sink Is Clogged 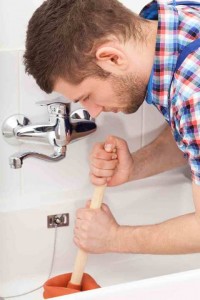 A kitchen sink can be used on a daily basis, but it’s unlikely to be used as often as a bathroom sink. Bathroom sinks are often getting clogged, but a kitchen sink is also a big offender as well.

The kitchen sink can have a lot of things go through it, especially if it has a garbage disposal unit attached to it.

Even crushing the items that go into the garbage disposal unit can easily clog a sink, especially if certain foods are put down the unit.

Potato peels, pasta, cabbage, rice and more can all severely clog a drain attached to a garbage disposal unit, and then it takes a plumber to get rid of the clog, especially since the unit will have to be removed to remedy the problem.

What A Plumber Would Do

If a clog isn’t readily seen in the P-trap of the drain, then it’s possible that the plumber will need to snake the drain, which can be done manually or with an electric snake. It’s very likely that the clog will disappear after these methods are tried by a plumber.

Get A Plumber To Do The Job

Need assistance with your clogged Allentown, PA sink? Give Schuler Service Inc. a call today at (610) 991-7098 and we would love to help.